Can we talk about community standards for just a moment?

As an artist, my work deals primarily with how we act when online and using messaging/dating apps and our acceptance of unsolicited lewd messages as the norm and a consequence of using social media, manifesting under the umbrella of ‘GRUNDER’, a series of tongue-in-cheek installations, grotesque sculptures and satirising large scale prints. In such a time where sex scandals are unfolding one after the other and sexual harassment cases and stories are ever present in the public consciousness I find it rather odd that once social media platform had decided to remove one of my images because it did not comply with their community standards.

The image in question depicted a conversation between two users on a messaging app and marked a turning point within my own work where rather than stay silent upon receiving a request for a lewd or nude image I would fulfil the users request but send them images of my (grotesque) work instead. It was hoped that this would awaken the nude-requesting user to the absurdity of their behaviour and stir a sense of shock and disgust within them. For the most part this has worked as planned but in some cases only seemed to make users more determined to get that all important nude image. In this respect I’ve had a number of different reactions to this exercise ranging from letting me know that those are not my genitals, as if I wasn’t aware or had mistakenly sent them a photo of a malformed six foot hairy penis sculpture by sheer accident, some then went on to change the wording of the question as if I just didn’t understand what they had asked but my favourite (who had been completely unphased by my sculptures) went on to ask for “genuine” photos which only serves to strike up bizarre and unwanted similarities between my genitals and the Loch Ness monster!

The community standards I write about, which deemed my image inappropriate for that particular social media platform acknowledges that there are times that users may want to share nude images but for a number of (unexplained) reasons does not allow nudity on its platform: “This includes photos, videos, and some digitally-created content that show sexual intercourse, genitals, and close-ups of fully-nude buttocks. It also includes some photos of female nipples, but photos of post-mastectomy scarring and women actively breastfeeding are allowed. Nudity in photos of paintings and sculptures is OK, too”.

From this, I’d have assumed my image would have been safe with it being a picture of a sculpture and not a photo of some real male anatomy. Secondly, although I do strive to make my sculptures as realistic as possible in terms of wet, fleshy appearance and hair, there is no way that you could mistake the abstracted and notably detached bodily forms for the real thing, especially when you consider the sheer girth of some of the phallic pieces is enough to bring tears to the eye!

It is also worth noting that in the time taken for me to upload the image (and carefully festoon the caption with witty hashtags) I had received two unsolicited and lewd messages that had obviously flouted none of the platform’s community standards. It does seem somewhat ridiculous that users can freely send whatever they fit to other users and sexually harass any user who they may happen across whilst those who try to speak out against the current accepted culture of laddish behaviour online are censored.

I do support the idea of online social media platforms having and following a set of community standards but feel that more could be done in order to ensure that the right content is removed. This does invite further discussion into online privacy, as I do not condone apps and internet providers snooping into users personal messages but by the same token do not enjoy the sexual harassment of unsolicited lewd messages. If users are able to harass me with lewd messages and unsolicited photos, I should be able to return the favour with grotesque sculpture.

As part of my residency at Digital Artist Residency  I’ve been getting into some (pretty basic) video work, using simple transitions and effects to give the impression of a smart phone screen. I wanted to project the monotony of using social messaging apps and the frustration of waiting for them to load only for us to waste our time waiting for updates or applications crashing. Are these apps really worth the wait and continual disappointment?

I also made sure to go and play in the snow during the recent cold weather, as you can see below. 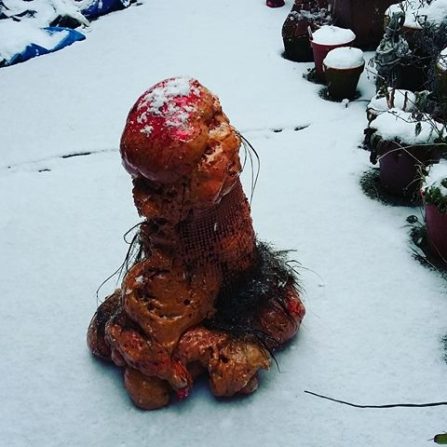 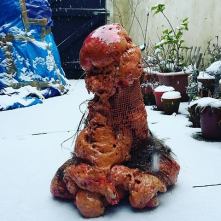 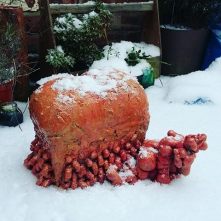 I can announce that I have been selected to be part of the March 2018 issue of Wotisart? magazine.

Can’t wait to get my copy!

Thrilled to announce that throughout March 2018 I will be artist in residence over at Digital Artist Residency.

Over the course of the month I aim to develop on video and digital work.